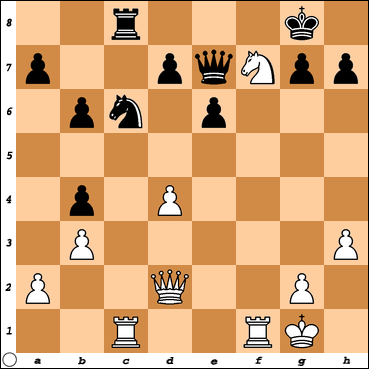 Chess is a game of skill. If a player has a higher rating than you, you should expect to lose more often than win. A chess rating system is generally set up so that a 200 point rating difference represents an expected performance of 75%. There are a huge number of different levels of understanding in chess so a rating system allows players to find evenly matched opponents or opponents slightly stronger, which can lead to more exciting two way games.

The rating system can also show how strong one is relative to the overall population of ChessWorld members.

Diagram - after losing the first game in my current ChessWorld tournament, I was pleased to make amends in this game. In this position (playing White) I need to capitalise on the half-open c & f files. My next move ?

* More about ChessWorld's rating system - a mathematical degree might be handy !