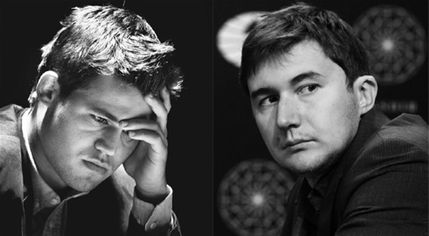 The World Chess Championship match between defending champion Magnus Carlsen and his challenger Sergey Karjakin took place in New York City 11th to 30th November 2016. Magnus Carlsen retained his title only after a rapid tie-break. In the final game, when Karjakin was desperately short of time, Carlsen (White) let him attack but he had everything worked out. The finish will go down in history. Carlsen 6 Karjakin 6 in classical time control games. Carlsen 3 Karjakin 1 in rapid games. Carlsen retained his title on his 26th birthday. A truly memorable day for him.

* What was the winning move ?   Position    Play the game